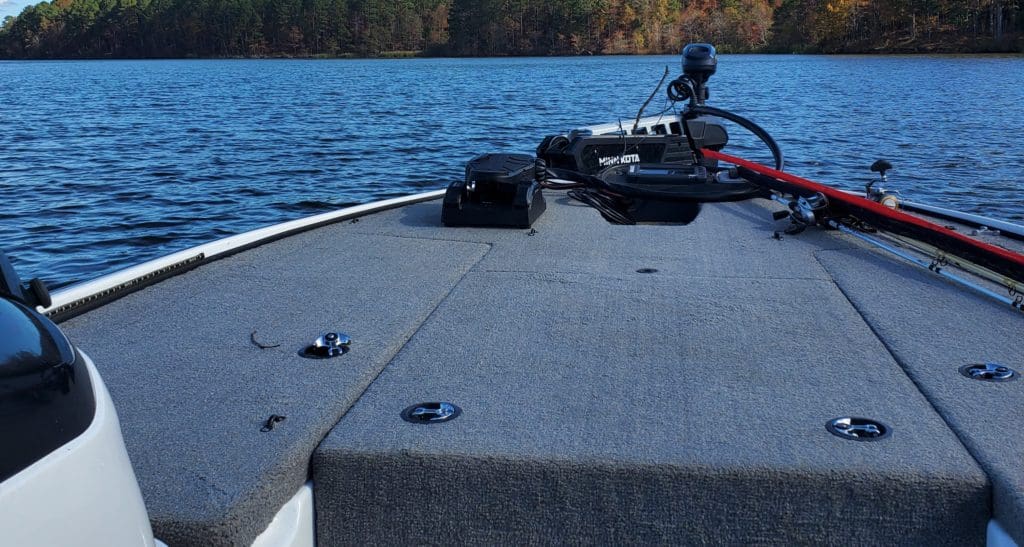 Buying a boat is a huge purchase that comes along with a lot of little details you want to get right. If you’re a first time buyer, you may not know where to start. Good news. If you’re here, you’re already in a great place to start. Here we break down terms to know and things to look for on your boat, outboard motor, and your trailer.

Length – The length of a bass boat is measured from the tip of the bow to the center of the stern. Bass boats are usually between 17 feet and 22 feet with very few models falling outside of that range.

Beam – The Beam measures the width of the boat, which is measured at its widest point. Bass boat beams are usually between 85 inches and 98 inches.

Fiberglass – Most high-end bass boats are built from a fiberglass construction, which is more accurately referred to as GRP or glass reinforced plastic. It’s advantageous for construction of hull shapes that are harder to form with aluminum and typically produces higher performance than you get with aluminum

Aluminum –  Aluminum is cheaper than fiberglass, thus aluminum boats are more affordable than their fiberglass cousins. It’s for this reason that aluminum boats have increased in popularity over the last decade.

There’s a lot to break down here and a lot of varying opinions on the subject. You just have to decide what’s most important to you. One undeniable fact is that aluminum boats are more affordable. Glass boats have become so expensive that many people are priced out of the market. Aluminum boats are also much lighter, which has both plusses and minuses. They can move faster with less power,  but the lightweight design affects the quality of the ride and the ability of the boat to remain in place. Aluminum boats get bounced around a lot more than your fiberglass will and will also drift a lot faster in the wind. Aluminum does tend to be a little more resilient to bumps and bangs from stumps and crap in the water, making it a popular choice in shallow rivers and other hazardous bodies of water. Fiberglass objectively looks cooler, which is something that does not affect your ability to fish but you may care about.

Always drive a boat before you buy it. You won’t know if you like it until you drive it. Some boats will handle rough water better than others, some boats will have wider turning radii than others, there are plenty of things to feel out on a boat that you can only do by driving it.

The weight of a hull can vary pretty widely from brand to brand, even with boats that are of similar size. This will affect things like top speed, how much the boat will drift in the wind, and how the boat handles rough water. Heavier boats usually blow around less on windy days and can handle waves a little better when on plane, but you’ll lose top speed in calm water compared to a lighter boat.

Check and see if you like the layout of the boat. Most modern bass boats are pretty efficient at using the space they have, so it’s hard to find something inconvenient, but some people have preferences. You’ll get different opinions on this but my personal one is that front deck space is a big deal. It’s nice to have a lot of operating room up there.

The motor is the most important item to consider when buying a boat. When you own a boat, stuff is going to break, but most things are repairable without excess financial costs except for critical failures in your outboard. You’re going to inherit some risk when buying a boat, especially a used boat, but you can manage that by asking the right questions and checking the right things.

Two-stroke – One of the two varieties of outboards, a two-stroke is named such because it completes its power cycle in two strokes of the piston. It’s an older, simpler design that’s largely being replaced by the four-stroke.

Four-stroke – A four-stroke motor gets its name by completing its power cycle with four strokes of the piston. Four-strokes are quickly becoming the dominant type of outboard because of their reliability and efficiency.

Powerhead –  The powerhead is exactly what it sounds like; the part of the motor that provides the actual power. It contains the engine block, cylinders and pistons, crankshaft, etc.

Water pump – The water pump is what moves water through the motor. Outboards are water cooled and a functional water pump is a requirement for one to work. The impeller is a rubber like propeller that facilitates water movement and needs to be replaced every couple of years

Skeg –  The skeg is a small arm that extends underneath the bottom of the lower unit. It assists the motor in turning and helps protect the prop from contact with the bottom.

Jack plate –  A jack plate is an attachment that is fixed between the motor and the hull of the boat. It’s an adjustable plate that allows the driver to raise and lower the height of the motor, which can affect things like speed and hole shot. Jack plates come in manual models that are adjusted with a set of tools and a hydraulic variety, which are much more expensive and can be adjusted electronically with a level that can be installed in the console of the boat.

How many hours are on the motor?

Always know the hour count on any used outboard you’re buying. Hours refers to the number of hours the motor has been running, not the number of hours the boat has been used. Obviously, motors won’t last forever and more usage contributes to wear and tear that leads to breakdowns. Hours are far from the only factor to consider, of course. A high-usage motor that’s been extremely well cared for can still be a fine thing to buy. But your risk level with a 14 year old motor that has 600 hours on it is obviously much higher than a 4 year old that has 100 hours on it.

Motors obviously require regular maintenance, so knowing if that’s been done is going to be the number one question you should ask when buying a used boat and the number one concern for you after purchasing a boat. General maintenance items typically include oil changes on your 4-stroke motors, gear oil changes about once per year, water pump impeller replacements about once every three years, bearing repacking and replacement as necessary, and just general upkeep of the hull, carpet, and trailer. Many people have the more intense regular maintenance done by a technician, but you can absolutely do it yourself.

The two-stroke is lighter and more powerful, which allows for better acceleration and hole shot, but it’s outpaced by the four-stroke in almost every other area. Two-strokes are louder, run rougher at idle speeds, are much worse with fuel efficiency and emissions, and are generally less reliable. Four-strokes are more complicated motors but they tend to break far less often. They offer a much smoother ride, especially at idle speeds, get far better gas mileage, and they don’t require oil to be mixed with the gas, meaning you can change the oil once a year like a car instead of constantly having to keep the reservoir full.

The trailer is never going to be the sexiest part of the shiny new boat you’re looking at, but it’s not something to ignore. If your trailer doesn’t work, your boat aint going nowhere.

Electric brakes – Larger boat trailers often come with trailer brakes that are initiated one of two ways. Electric brakes are simply an electrical pulse that triggers the braking mechanism in the trailer when you hit the brake in your vehicle.

Surge brakes – Surge brakes are hydraulic brakes that initiate via a cylinder that is pressed on by the trailer hitch when the tow vehicle’s brakes are engaged.

Bearings –  Bearings are contraptions within the hubs on each end of the axle that allow the wheels to turn freely. Bearings need to be coated in marine grease that should be replaced with relative frequency. Bearings also wear over time and need routine maintenance.

Smaller trailers typically don’t come with brakes at all, but larger trailers often come with surge brakes, which are vastly more common on boat trailers than electric brakes. Electric brakes are generally not recommended on trailers that are temporarily submerged in water for obvious reasons. Whether or not you’ll want surge brakes on your trailer is determined by the weight of the trailer and any other factors that can affect brake load and stopping distance of your vehicle, such as inclines you’ll typically be driving down.

Check what kind of plug the trailer lights have and make sure your car has a compatible receptacle. If you have a mismatch, it’s not particularly difficult to replace, but it is something you’ll need to do.

The first thing to break on any trailer is always a light somewhere. I have no idea why these things are so damn temperamental but I’m convinced they’re made that way on purpose just to drive people crazy. Nothing about the trailer lights should ever play a role in your decision to buy a boat but you should look at them just to know if you need to fix them after buying.

As someone who has been passed by his own wheel as it went flying down the road, trust me when I say that bearing maintenance is important. Bearings should be repacked with grease about once a year. They should be checked regularly to ensure that they’re still packed with grease and that they are still in alignment. If one of those two things fails and goes unnoticed for long enough, the bearing will wear beyond repair and disintegrate. That’s how you lose the entire wheel on the highway. Make sure you’re doing this and make sure you ask about the bearings on the trailer if you’re buying a used boat. Check the seals on the back side of the axle also, as those can wear and blow out, allowing all the grease to escape. I recommend Vortex hubs, which come prepacked and assembled and have a seal lock feature that prevents grease from leaking out of the hub.