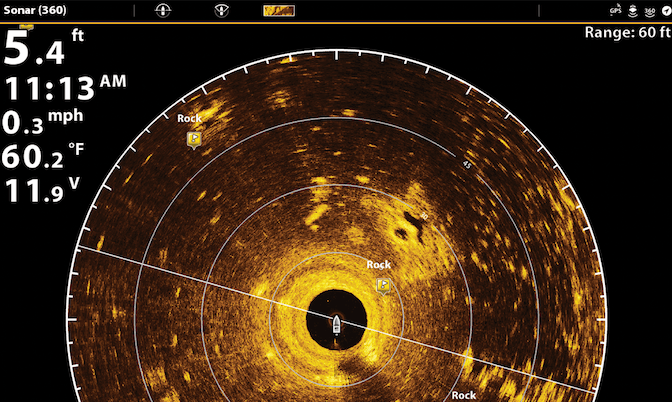 Fishfinders, depth finders, sonar, electronics, units, whatever you want to call them, there’s no denying the impact innovation in the fishfinder market has had on bass fishing. It feels like the game is changing almost every year, most recently with live imaging technology that will completely change the way people fish. The negative of all this innovation can be seen by taking a quick look at the price tag on today’s top-of-the-line fishfinders, which may cause side effects such as shortness of breath and shock.

One positive though is that previously cutting-edge technology is now becoming available in lower level models, making it more accessible to all anglers. You certainly can, but you don’t need to spend $4,000 on a fishfinder to get something that will bring your game up a notch. I’m here today to help you make the right decision for you and your wallet. So let’s get started.

If you want to skip all of the reading and just want my recommendation, the Lowrance Elite Ti2 line is hard to beat.

I've not had any issues in our testing. It feels fast but I'm looking for processor data to confirm.

This is the ultimate value unit. An Elite-9 ti2 can be purchased for under $1000.

Sonar - Sonar is the most basic feature of a fishfinder. It uses lower frequency soundwaves to create a visual representation of what is below the boat that looks like this. 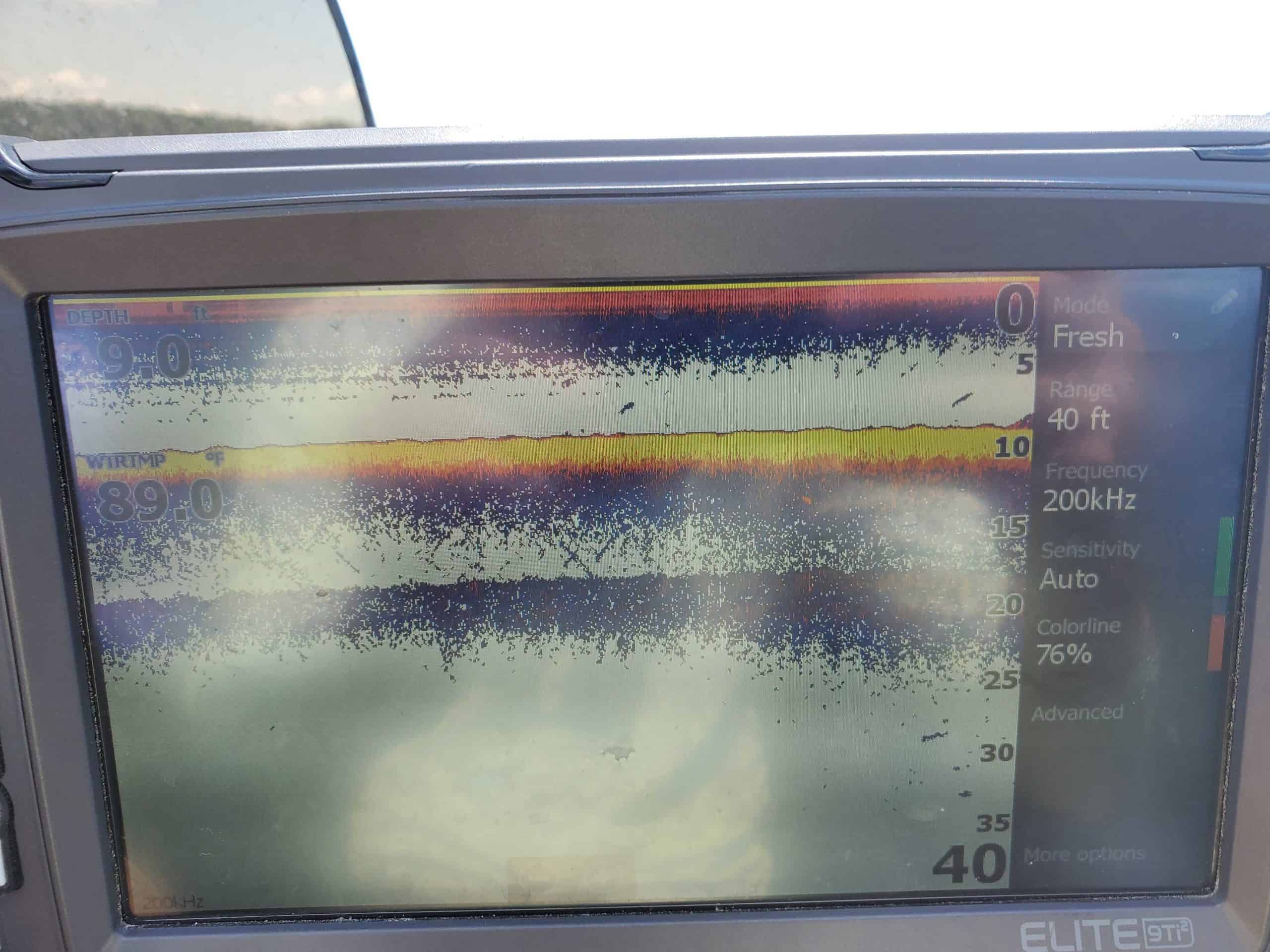 Downscan - Downscan shows you the same thing that sonar does, but with a much more picture-like image. It uses higher frequency beams to produce realistic images. Downscan is easier to interpret than standard sonar because the visuals produce more closely resemble the actual appearance of objects like brushpiles, logjams, grass, etc. Take this christmas tree for example. 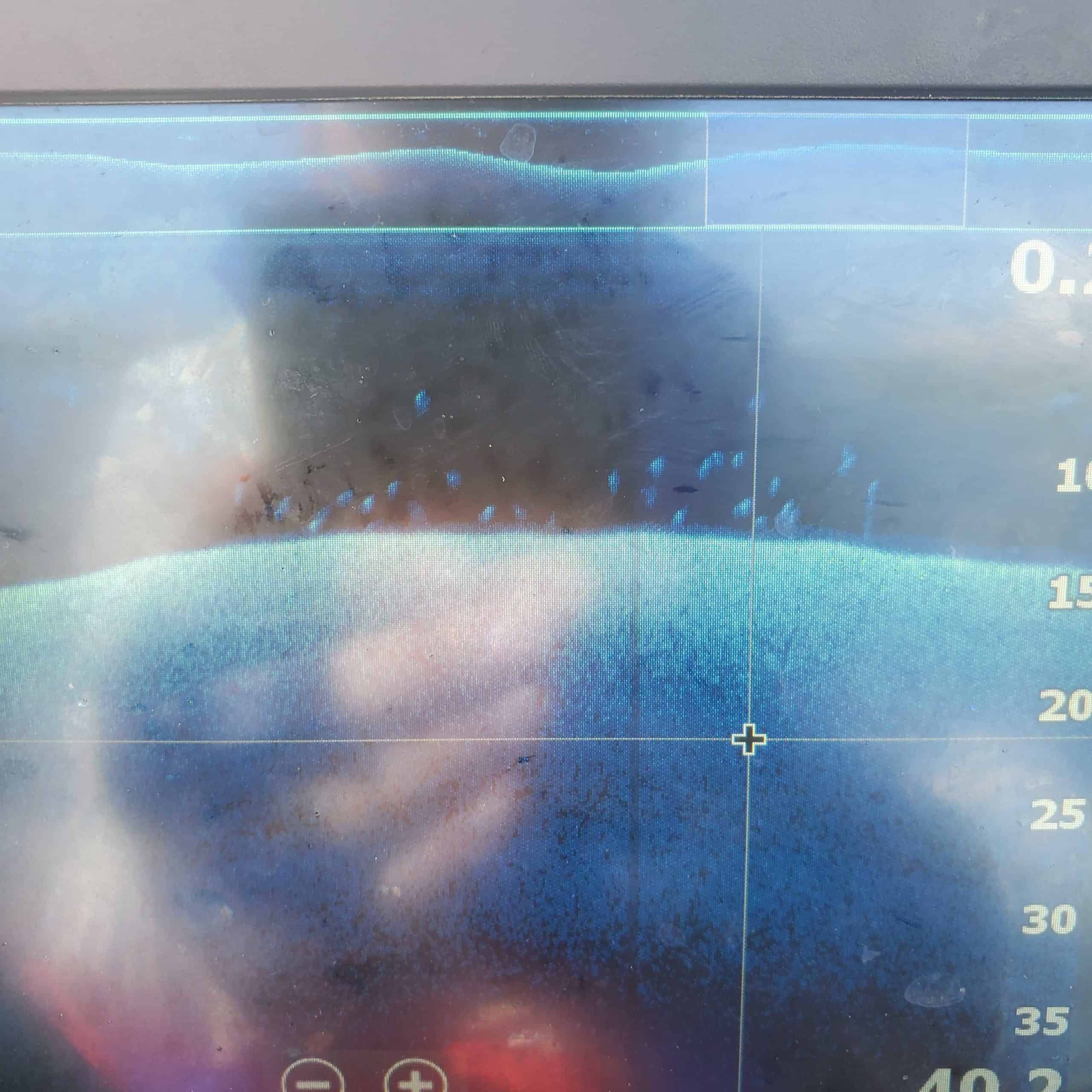 Sidescan - Sidescan was an incredible innovation when it first hit the market, but it’s pretty standard across all lines of products now. Sidescan also uses a high-frequency beam to display picture-lke images, but instead of seeing what is below the boat, you get a bird’s eye view of what is to the side of the boat, like so. 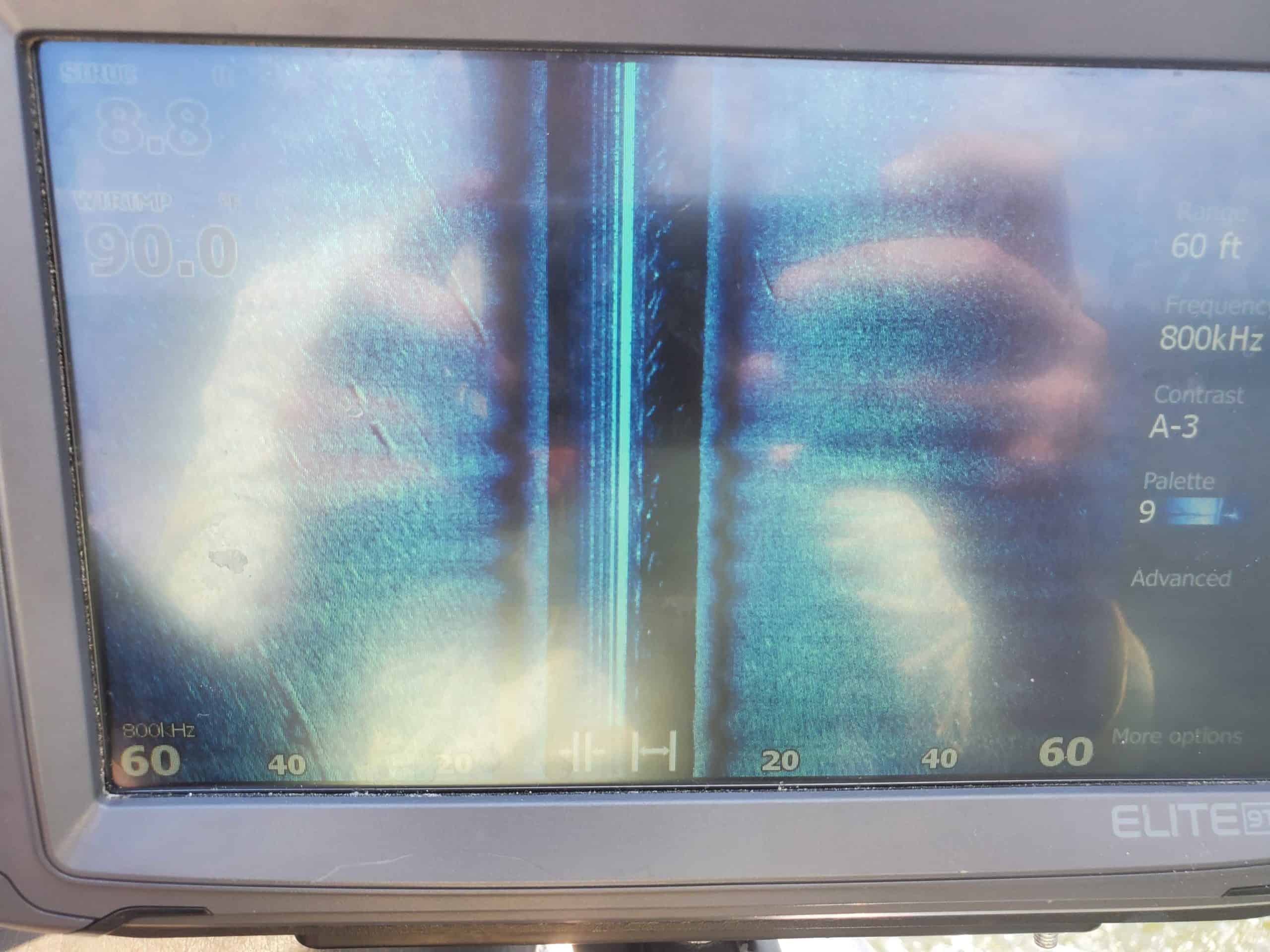 Your boat really needs to be moving for sidescan to produce a readable image, which is why it’s not really necessary on a fishfinder at the bow of the boat. Screen size is important to get the maximum value out of sidescan, which is why you’ll often see bass boats with bigger units at the console than on the bow.

Mapping - GPS and mapping technology built into most fishfinders.

Live imaging - The newest of innovations in the electronics market, live imaging technology was first pioneered by Garmin with its LiveScope feature. Lowrance has since released its own version of the technology. Live imaging is best explained by saying it’s like watching a video of what is below the surface. Directional transducers allow you to point your beam in any direction and get real-time visuals back, allowing the angler to watch his/her bait move through the water.

A look at Fishfinders on the market

Lowrance offers three lines of fishfinders, the Hook2 series, the Elite TI series, and the HDS Live series. Here is a list of the features offered in each line

Humminbird is the only player in the market to not currently offer live imaging technology (I’m sure this will change at some point), but it is the only player to offer 360 imaging. 360 imaging could be considered a variant of sidescan in the way it’s used, but instead of images of what is alongside the boat, you return a circular image of what is around the boat in all directions.

Garmin offers 3 lines of fish finders, which are broken up into different series. The STRIKER™ series is Garmin’s cheapest offering, while still featuring a full compliment of features. The one thing it does not have is compatibility with Garmin’s Panoptix Livescope technology, which is the original live imaging technology on the market.

Both of Garmin’s upper level lines, which are the ECHOMAP and GPSMAP lines, are compatible with this technology (which must be purchased separately),

At the absolute minimum, you should have sonar and mapping. To fish effectively, you need to be able to scan, which obviously requires some type of sonar, and you need mapping to know where your boat sits in relation to structure and things you’ve found with your sonar. Good news is you’ll be hard-pressed to find any units these days that don’t offer both these things.

Most lower-level units will also be purchasable with downscan, and many now offer sidescan as well. Humminbird’s Helix 5 offers sidescan in a bundle that costs $499.99, and Lowrance’s Hook series offers mapping, sonar, downscan, and sidescan in a combo for only $399. So you don’t have to pay an arm and a leg for these features in 2020.

These lower-level units are not going to give you optimized versions of these features, though. Your entry-level products are going to offer slower processors, smaller screen sizes (which is big deal, I promise), and lower quality transducers that just don’t produce as good of an image. Lowrance’s premier units use their Active Imaging 3-in-1 transducer, and Humminbird’s premier units use their heavily-touted MEGA-Imaging technology. The aforementioned Hook series is not compatible with the 3-in-1, and MEGA-Imaging is not available on the Helix 5. This is what I mean by not optimized. The features are available, but they’re lower quality versions.

If you can afford to do so, it will pay off to step up your fishfinders to at least mid-level models. The Lowrance Elite TI2 series is phenomenal. I can tell you from personal use that the Elite-9 TI2 punches far above its weight. I can see everything from small brushpiles and stumps to individual fish on the sidescan of that unit, and the whole package ran me about $1000. Comparable models from Humminbird will offer similarly large steps up in quality for a similar price tag. It’s worth it.

Anyone who has ever taken an economics class has heard about the law of diminishing returns. Whether it’s rods, reels, boat, fishfinders, or whatever else, the value you get out of almost all fishing equipment is subject to diminishing returns as price increases. As you make your way through the available models of fishfinders, the value you’re getting from each step up in quality will begin to decrease. This isn’t as true as it was pre-live imaging, which is a technology exclusive to top-of-the-line units, but it’s still pretty true.

I say all this to say that you don’t need a $3000 fishfinder to have a good fishfinder. There is no question the Solix 15 and the HDS 12 are remarkable products with insane amounts of technology, and I’m not saying they aren’t worth the money, but a mid-level model like an Elite ti2 is not going to be insufficient. Don’t feel like you can’t be competitive or effective fishing without the best stuff. It’s not true.

Everybody is going to have a preference on brand here, and nobody is wrong. Every company has incredible technology now and there isn’t a brand that is going to deliver you a crappy product. I say all this to say that you should buy the best model you can afford at the biggest screen size you can afford. As mentioned before, stepping up into at least the mid-level range will be worth the extra money, and if you can afford a premier line product, you should get it, but if you can’t, I highly recommend Lowrance’s Elite ti2 line.