What is a thermocline, and how does it affect bass? 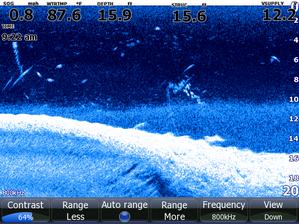 What is a thermocline?

A thermocline is a thin layer in a body of water that forms at a certain depth, in which water temperature changes at a rate faster than the water above or below the thermocline. In simpler, more bass fishing specific terms, it’s a thin layer of water that divides the upper part of the water column from the lower part of the water column. This is a phenomenon called stratification, and it’s super important when it comes to finding summertime bass.

When a lake stratifies into two distinct sections, divided by a thermocline, the upper layer of water will have different properties than the layer that exists below the thermocline. The upper layer will be much more conducive to life than what is below.

When does it form?

A thermocline will typically show itself mid-summer and is prevalent when the water is at its absolute hottest. The spiking temperatures help to create it, and the falling temperatures in the fall remove it in an event called turnover. In early fall, after the temperatures begin to drop, you’ll see detritus and dead fish floating about. This is a result of turnover, which has brought the dead fish and other wildlife that sat in the oxygen-deprived waters below the thermocline back to the top of the lake.

How does it affect bass?

How do I find it?

The best way to find the thermocline is with a fishfinder. When the lake has really stratified, you can actually see the thermocline on your depth finder on your sonar or downscan screens. Note the divide in the water column in the picture below.

That’s the thermocline. That’s the depth at which below you will not find bass. So start your search above that depth, and you’ve already narrowed on where you’ll eventually find a school of bass.

Five Places to Find Bass in the Prespawn