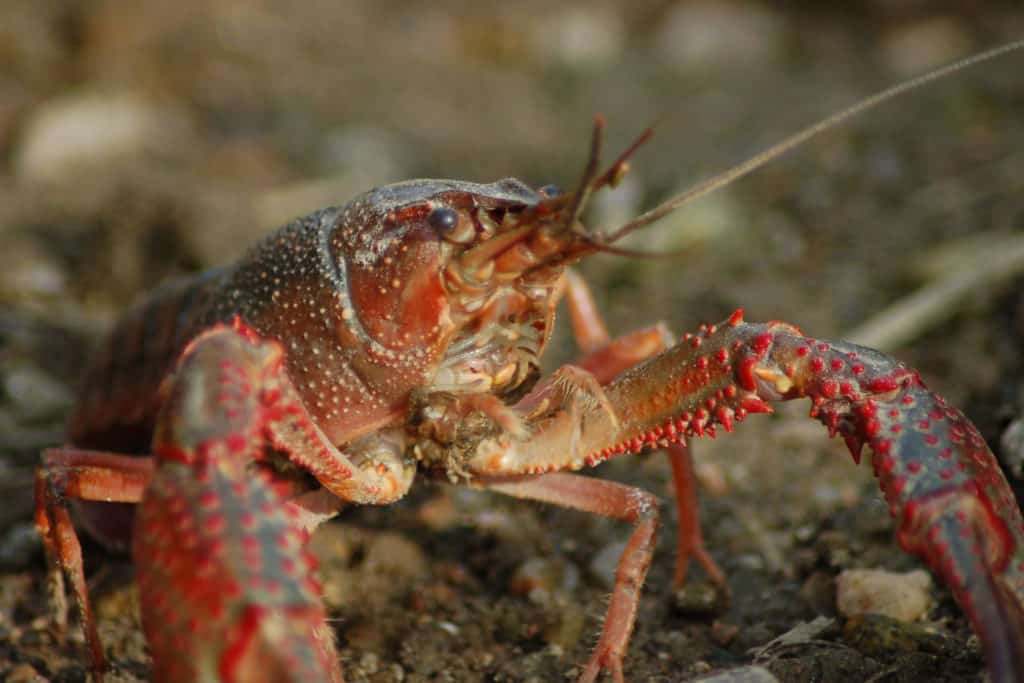 Bass love to eat crayfish. This is no secret. Crayfish biologist Zachary Loughman has noted during studies just how much the smallmouth bass in his home state love munching on these.

“I have done a lot of snorkel surveying for crayfish. The smallmouth bass are ridiculously brazen and brave, and they will follow you. Once they figure out that you are lifting the rocks and the crayfish are there, it’s like you have a new friend. You’ve got these bass hanging off like 15 inches to the right and left of you, and I’ve flipped a rock and had a smallie go in and just destroy [one].”

Loughman, an Assistant Professor of Biology and Co-Director of the MA/MS in Biology at West Liberty University, is something of a crayfish savant, and he was willing to let me pick his brain on some key lifecycle elements of crayfish and how they intertwine with its predator species, the black bass.

The spawn and the molt

Most bass fishermen understand that for crayfish, also referred to as crawfish or crawdads, reproduction happens in the spring and the fall, and that there is an event called a molt involved in there somewhere. Many don’t put more thought into it than that, and while it’s not incorrect, Loughman notes that it’s a much more complicated process than it’s often reduced to in bass fishing discussions.

Loughman goes on to explain that there are over 400 species of crayfish in America, and the timing of the molting, mating, and spawning events can vary widely from species to species, but crayfish from the same genus tend to follow similar patterns. According to Loughman, there are three major genera of crayfish across the US (Cambarus, Procambarus, and Faxonius, the last of which is sometimes called its old name of Orconectes), and knowing which type of crayfish live in your body of water can go a long way for you in understanding the timing of their life events, which can in turn clue you in on bass behavior relating to them.

Loughman describes the Procambarus genus as “living in your wetlands, your coastal plain environments, your bayous.” Because of their locales, bass anglers are less likely to interact with these crayfish, but tidal bodies and deltas have hosted their share of bass tournaments, so certainly not never. Loughman explains that these crayfish are different from the other two in the sense that, while there is some seasonality to it, they don’t have one large spawn event or period. Loughman adds that “There is always going to be some molting, there is always going to be some reproduction going on. They’re kind of aseasonal.”

The other two genera behave much more in line with the common conceptions about crayfish in the world of bass fishing, particularly the Faxonius. “These are the animals that you see the mass molt events in that your fishermen are probably talking about.” Loughman continues by saying that this genus of crayfish typically molt all at once, have a mass mating event, and then all molt again. This usually occurs in the fall, before the females wait until the spring to begin the spawning process. Some species will have mating occur in the spring also, and the exact timing will be affected by region and water temperature.

While the distribution of these is wide, Loughman clarifies that they aren’t as dominant in the eastern part of the country and “where they reach their absolute zenith of diversity is in the Ozarks, in the midwest, and then in the Ouachita Mountains in East Texas.” 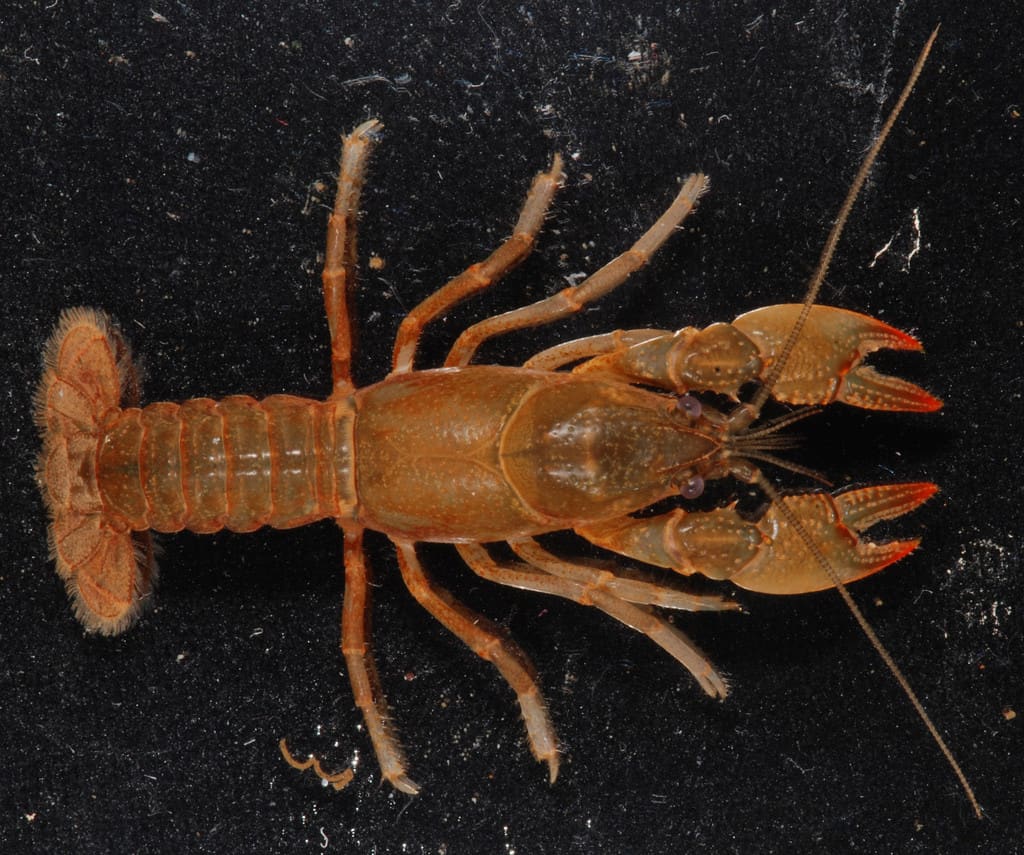 North Carolina, for example, has very few of these species and is dominated by the Cambarus (note that species diversity does not necessarily correspond with population percentages), which generally molt into a sexually active state and begin mating in late summer and then molt out in mid/late spring in Loughman’s home state of West Virginia. Because of the impact of water temperature, which Loughman has seen swing the timing of crayfish molts as much as a month and a half, the bulk of the mating and molting may vary by region. This genus also does not go through a mass molt in the way Faxonius does, but populations of them generally molt and mate within the same time periods, giving bass anglers a window that is still relatively definable.

These molt events are important because they are intimately linked to the mating process, which is when adult crayfish are most vulnerable to being eaten by bass. It's a common belief that crayfish molt after mating, and they do, but they also must molt sometime prior to it to achieve a sexually active state. The molt produces brightly colored crayfish with softer exoskeletons, both of which make them easier meals. It's no secret to anyone anymore that red and orange crankbaits are killers in the early parts of the fishing season. There is a reason for that.

But what follows a mating event and subsequent spawn may also be important depending on your species and body of water. Loughman has found that the baby Faxonius crayfish that enter the population after the spawn are absolute feasts for the smallmouth in his home streams.

“When those babies enter the stream, they basically are little eating machines and they grow like mad, and in the streams we’ve studied them in West Virginia, that usually happens in June and July. When we look at the gastric lavage samples, [the smallmouth] are loaded, I mean loaded, with those young of the year crayfish.”

Depth is an absolutely critical factor for bass. But for crayfish, it doesn’t really matter according to Loughman. “They are not picky,” Loughman says before he goes on to explain that as long as the habitat they desire is present, the crayfish will live there, regardless of if it’s inches deep or 100+ feet deep.

But the habitat does have to be there, and most bass anglers know that such habitat usually consists of rock. But Loughman digs deeper to explain there is a specific kind of chunk rock that makes crayfish the happiest.

“If you’re in a stream or a river and you have big slab rock, big boulders that are more flat than round, that is their absolute favorite place to be. Whenever I’m looking for a place to sample and I see a big slab boulder, I get super happy and my back starts aching before I try to flip it, because that thing is going over.”

Loughman goes on to say this type of rock provides better protection for crayfish for a number of reasons, and that this is generally true across all bodies of water.

One critical aspect of the crayfish lifecycle for bass anglers is seasonal coloration. This is where a lot of myths exist.

“There is this perception that the crayfish is undergoing this seasonal color change. In reality, what’s happening is, after it molts, it has a perfectly clean exoskeleton, and then algae, heavy metal deposition, little protozoa, and all kinds of stuff starts growing on their exoskeleton. So depending on what kind of stuff is in the environment, that’s going to take what could be a really crazy pattern on a crayfish, and it’s just going to make it all green.”

The point is that the color of crayfish, and the length of time it takes to achieve that color after molting, is heavily influenced by environmental factors.

This is a critical piece of info for anglers when it comes to bait color selection. The quality of the water you’re fishing will have an impact on the color of the crayfish the bass are eating, and how rapidly they turn that color after molting. Loughman notes that in pristine mountain streams he has surveyed, crayfish can retain their original coloration all the way up until they molt again. This is obviously not going to happen in polluted lakes with turbid water. 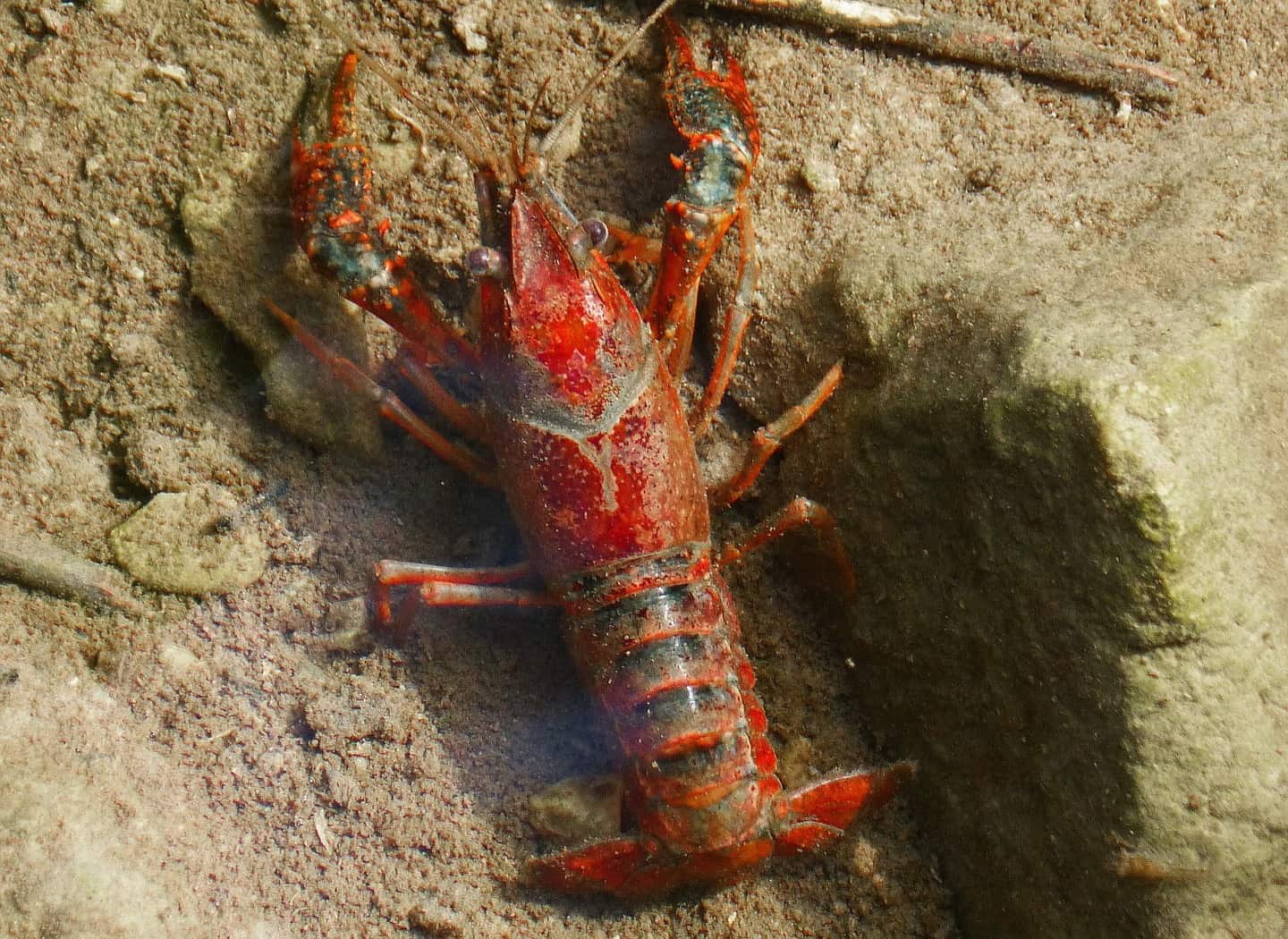 The natural coloration of most crayfish, which is always visible immediately after molting, will usually be some variation of red, yellow, or orange.

It's also worth noting the pigments found in plant material that crayfish eat can be reflected in the crayfish's exoskeleton. You can see slight changes in claw coloration based on diet, but Loughman clarifies that it isn't an extreme change.

"They can't necessarily start eating so much that a crayfish whose claws are normally green are now going to be red. It's not to that extreme. "

Loughman is, not surprisingly, a big advocate of crayfish conservation, and all bass anglers should be too. “If you lose the crayfish, you will see a decline in the black bass population. That is going to happen.” So caring about these little creatures is definitely something you need to do if you want to continue catching bass.

Loughman also explained how he’s seen smallmouth absolutely destroy native crayfish, but struggle to eat invasive species because of differing defense mechanisms. These invasives often enter water bodies as bait. While we as bass anglers don’t often even go near live bait, avoiding the use of non-native crayfish as live bait is still an important message to spread among the fishing community as a whole.