How to Select the Best Trolling Motor for your Bass Boat 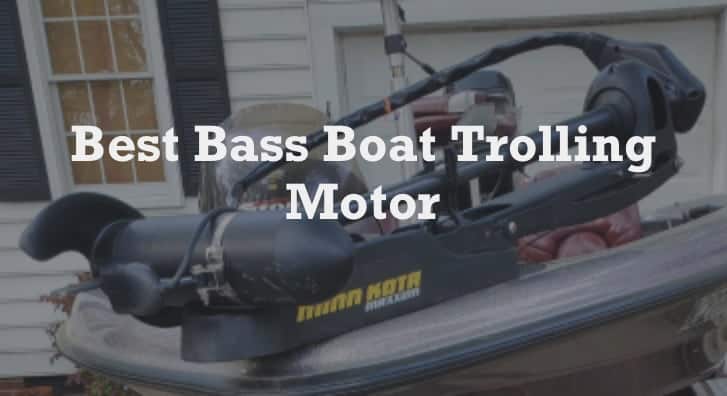 There was once a time when a trolling motor was a relatively simple piece of equipment, but that time has come and gone. Like everything in the sport of bass fishing, innovation is happening too fast for us to even keep up with.

The result is a bewildering amount of choices with lists of features that are not getting any shorter. So where does one even begin with all this? By knowing what you’re reading about

First and foremost, trolling motors come in a variety of styles. If you’re putting a trolling motor on your bass boat, you’re going to opt for a foot control bow-mount model, which is what we discuss below. Bow-mount hand-powered motors are also available as are transom-mount motors designed more for the actual fishing style known as trolling.

Shaft length: the length of the shaft (duh)

Thrust: Thrust is a measure of power for a trolling motor. More thrust equals more power. Trolling motors range from around 45 to around 115 pounds of thrust, with bigger boats requiring more.

Voltage: The greater the thrust of a trolling motor, the more voltage it requires. Trolling motors will run on 12-volt, 24-volt, or 36-volt systems, which require one, two, or three batteries, respectively.

Foot-pedal: Trolling motors for bass boats are always going to be foot-pedal trolling motors. All of the controls for the motor are attached to a foot pedal that is mounted on the front of your boat

Heel-toe steering: Heel-toe steering is the steering mechanism for most foot-pedal trolling motors. The heading of the motor is determined by the angle of the foot pedal, which you push downward with the front of your foot, and upward with your heel.

Transom-mount: A transom-mount trolling motor is mounted on the back of your boat instead of the front. It’s a setup typically used for slow trolling fishing styles common in crappie fishing.

The first decision you have to make when selecting a trolling motor is how much you’re willing to spend. If you’re new to the market, you’ll be surprised at how expensive these things can get. You’ll also be surprised at just how much technology is in today’s trolling motors, which may or may not justify the cost depending on who you are and what you want.

We’ve broken down our recommendations into three categories based on price ranges. If you’re looking for a new trolling motor and you’re not sure what you need, hopefully this will get you started.

Minn Kota is going to give you the best bang for your buck at this level. The Johnson Outdoors subsidiary has two offerings for under $1000, the best of which is going to be the Maxxum. The Maxxum is a good base model for a trolling motor. It’s a tank, it’s well-built, and it’s going to start when you push the button. As someone who has used a wide array of trolling motors, let me tell you that last part is not always a given. If you’re looking for a trolling motor in this price range, those things should be your criteria. The Maxxum checks those boxes.

The Maxxum is a 24-volt motor, meaning it requires two batteries, and it’s available in 70 and 80 lb thrust models, which will be more than sufficient for small to mid-size bass boats. It’s the least expensive model to feature their (link to) breakaway mount, which helps with durability and is definitely something you’ll want.

The Maxxum won’t deliver any advanced features like networking capabilities, power-steering, or GPS anchor. It’s a pretty bare-bones model, just like anything in this price range will be, but it’s definitely a head above the other options here. 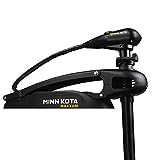 The Minn Kota Fortrex has been a staple of the trolling motor industry for years. It used to be Minn Kota’s premier model, but with all the recent innovation, it’s more of a mid-level model now. It’s still a beast though.

The Fortrex is basically a Maxxum on steroids. It features what Minn Kota calls a Lift-Assist Mount, which cuts the weight of the trolling motor when lifting to stow or deploy. The Fortrex is also available with up to 112 pounds of thrust, making it a better option if you have a larger bass boat.

The Fortrex will be a great choice if you’re looking for quality and reliability, but don’t need the integrations and features of top-of-the-line motors, as it’s stronger and more powerful than cheaper options. 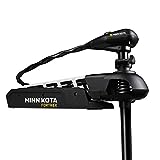 2019 was the year of the trolling motor. Motorguide released the Tour Pro to compete with Minn Kota’s Ultrex model, and Lowrance and Garmin entered the market with premium and innovative offerings. Truthfully, at this level of product, you can’t really make a bad decision.

If we’re going to make a recommendation, we’re probably going to go with the Ghost. There are some super innovative and useful features that will come with every motor in this class, but Lowrance’s attention to detail pushes it just a hair above.

The Ghost is extraordinarily quiet. You barely know it’s on when it’s running. In addition to features common across top-of-the-line motors, such as GPS anchor, power-steering, and integration with depth-finders, Lowrance has really invested into ease of use.

The button on the pedal of the Ghost can be quickly and easily removed and reinstalled on the right or left side of the pedal, so you get your pick of where’d you like it. The buttons on the sides of the Ghost pedal are programmable (aside from the GPS anchor button), so you can set those buttons to do a number of different things, including dropping a waypoint. The lower unit of the Ghost will also automatically align itself with the trolling motor bracket when it is pulled out fo the water, so no more banging the trolling motor around when stowing it.

One thing about the  Ghost, Garmin Force, and Motorguide Tour Pro is they’re all new to the market. If you’re interested in the been-there-done-that option, Minn Kota’s Ultrex doesn’t have as many innovative features of some of the newer options, but it’s a proven option. 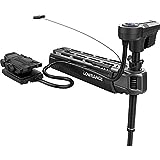 What to Consider When Buying a Trolling Motor?

As discussed, the voltage of a motor translates to the number of batteries required to run it. Don’t buy a 36-volt trolling motor if you only have room for two batteries.

This is a dangerous one. Most bass boats have their trolling motor installed in a recession tray so the motor pedal is level with the floor of the boat. Make absolutely certain that the pedal of the motor you buy will fit in the recession tray on your boat. Otherwise, you’re going to have quite the headache on your hands.

Trolling motors are not concerned as much with speed as they are thrust. Thrust has to do with the amount of power that is applied to push or pull the vessel through the water whereas speed is a determination of prop pitch and motor R.P.M.The basic rule to remember when buying trolling motors is five pounds of thrust for every two-hundred pounds of boat. More thrust is not always better because then the boat can become unstable and not as easy to control. However, a ten to twenty pounds of extra thrust will be good for any application.