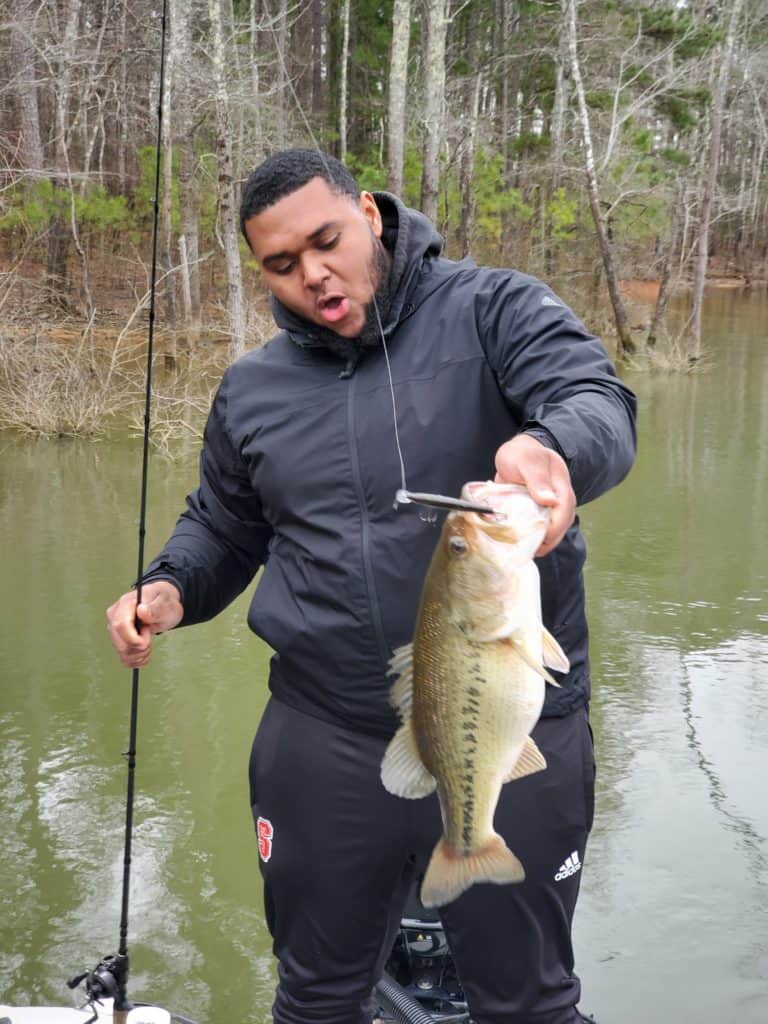 Fishing pressure is a fact of life, and it sucks. Trust me, I live 20 minutes from Shearon Harris in North Carolina, the lake that cracked the top five of Bassmaster’s top 100 after a couple 40 pound bags were weighed. It’s an incredible fishery, but it’s small, close to a very populated area, and supposedly a destination lake now, at least according to the world’s foremost authority on bass fishing.

What Is Fishing Pressure?

Fishing pressure is the effects felt on a body of water (and fish) as a result of an increasing amount of fishing taking place.

Lots of locals that swore by Shearon Harris would much rather go to the adjacent lakes now. There are a number of reasons why it’s changed over the years, fishing pressure being just one, but it is decidedly one, and it’s a factor on almost every other lake out there today.

Fishing pressure will force you to account for two things:

Yes, it’s true that fish get conditioned. They’re not particularly smart, but they are capable of learning. I’ll never forget my first experience with this when I was visiting my grandparents and the pond they had on their farm when I was just a very small human.

” I caught a big fish on the first two casts. I think I threw a black spinnerbait, but it literally did not matter. I could have thrown a keychain out there. ”

Nobody fished in this pond. It was private, nobody that lived ever fished in it, and it was stocked with 3-4lb bass. I caught a big fish on the first two casts. I think I threw a black spinnerbait, but it literally did not matter. I could have thrown a keychain out there. It was fun.

As the week wore on, it got harder to catch these fish. I would switch baits (top 5 pond baits) and I would get a bite or two, but the returns diminished to the point where I could not even get a bite by the fourth day being there.

I put so much pressure on the pond that I fished it to death. Now this is an extreme example, it was a small pond after all, but high amounts of fishing pressure will eventually start to have an impact. Just go read a story about what your home lake was like when it was first stocked. There’s a reason it’s not like that anymore.

So how do we, as anglers, deal with this? It’s not easy, but with some forethought, you can set yourself apart from the competition that’s just repeatedly doing “what you’re supposed to be doing.”

The most obvious idea is to switch up your bait to something that the fish aren’t seeing as much. I’ve had success with this in the summertime targeting big schools in some of the more popular community spots in my lakes.

Giant spoons and 12-inch worms are great upsized baits, and tiny swimbaits and dropshots are great downsized baits. It takes some experimentation and understanding of your body of water to know what aggressive countermeasures to fishing pressure might actually work, but experimenting is the whole point.

So throw a 12-inch worm. Hell, throw a 20-inch worm, okay that might be too big for a fish to actually eat, but don’t be afraid to try something small or comically oversized. Ridiculousness is your friend when you’re trying to out-fish everyone that is following the textbook.

Instead of changing the bait entirely, changing the way you retrieve can sometimes trigger bass that have become messed up in the head. When dealing with inactive bass that are wary of your bait, many anglers slow down, and this absolutely works. But the opposite can also work. Speeding it up can trigger reaction bites from otherwise inactive fish.

This is the crux of stroking a jig, which is an aggressive retrieve that involves jerking a heavy football jig off the bottom and letting it race back down. The rapid fall triggers a reaction bite.

You can also speed up your crankbaits. Ever just reeled the piss out of your crankbait? Probably not, because it seems dumb and also feels like exercise, but the fish are not used to seeing a crankbait barrel passed them at a million miles per hour like a baitfish that just snorted a gallon of adderall.

It’s something they haven’t seen much of before, and it truly does work. I’ve seen it happen. Being willing to experiment with odd retrieves that look and feel stupid can be the difference between 25 pounds and complaining that there’s too much fishing pressure.

There is stuff out there that everyone doesn’t know about. Whether it’s obscure rock piles in the middle of nowhere, a ditch somewhere in a pocket, new grass growth on a main-lake flat, or something else, it’s out there. But the only way to find it is to be the one willing to look for it.

Turn to your electronics, but don’t just look at obvious structure on your topo maps. Scan boring areas that look like they have nothing. Find a place without any sort of irregularity and spend some time seeing what’s over there that nobody else bothered to look for. You won’t find a lot, but when you do find something, it can prove to be pretty untapped.

You may have heard the term “feeding window.” Bass don’t eat all day, but when something does trigger them to eat, they become much easier to catch for obvious reasons, the primary one being they’re more aggressive and not wary of striking something.

That wariness is an effect of fishing pressure. If you know there are fish around, but you’re not getting bit, it’s possible that those fish are just not eating, and if nothing else makes them bite, you can always leave and come back.

This is more for summer and winter when feeding windows are more defined, but it absolutely does work. Fishing can definitely be a timing deal, and if you’re around a lot of fish but just cannot get a bite, making repeat trips to that spot will give you a chance to hit it at the right time.

The core of any strategy for dealing with pressure is to experiment and do things nobody else is doing.

The core of any strategy for dealing with pressure is to experiment and do things nobody else is doing. By no means does that mean that you should completely ignore tactics that you know work. Simply going out and doing the stupidest thing you can think of all day would make you a pretty ineffective angler. But the best anglers, and definitely the most consistent ones, are the ones that are willing to go against the grain. Remember that the fish did not read the article that says you should be throwing a spinnerbait right now. Don’t be afraid to show them a different look.