The prespawn migration that bass undertake every spring comes with its challenges, but figuring it out can mean the best day of fishing of your life.

“Prespawn” refers to the time of year between when winter fish get their first inclination to spawn and when they actually begin the process of making beds. It’s a volatile and challenging time to catch bass, but it’s incredibly rewarding if you get on top of it.

The defining characteristic of the prespawn period is the migration, when bass move from their winter hangouts to their spawning grounds, which are often the backs of creeks and pockets. This migration is not random. It’s triggered by the changing photoperiod during the spring and, with a diligent approach, can be tracked and intercepted, resulting in large numbers of huge fish being caught. That’s what we’re here to talk about today.

In the early parts of the spring, the lengthening photoperiod triggers an urge in the bass to spawn and they begin to push towards shallower water. Typically, bass are the deepest they’ll be all year in the winter and they love to suspend. In lakes that have defined river channels, bass will spend a lot of time suspending around them. When their urge to spawn is triggered, they make an initial move toward their spawning areas. This is the beginning of the prespawn.

Oftentimes, they move on top of a piece of structure adjacent to their winter holding areas. This is commonly a main lake point that extends from the mouth of a creek to the main channel. That’s really the textbook scenario, but the early parts of the migration can manifest themselves in many different ways. Hank Cherry won the 2020 Bassmaster Classic catching early prespawn fish that were gathered around a bridge.

“This is the time of year where the biggest bags of fish in the lake are usually caught.”

From here, bass will migrate towards the backs of the creeks and stop at certain areas along the way. These stopping places are where they feed and where they can best be caught. Fish in these places are referred to as ‘staging.’ Staging bass can sometimes be found in huge numbers and this is the time of year where the biggest bags of fish in the lake are usually caught.

Bass will stage in various places throughout the migration route. Finding those places is about finding structure that intercepts the route. This is where map study comes in. Figuring out how bass move into spawning pockets requires a ton of time looking at your topographical maps.

The key to effective map study during the prespawn is to go in reverse. Start by finding the most conducive areas on the lake to bass spawning and follow the map back out to the main lake. This sounds trivial at first but the largest quantities of fish will be moving to the best spawning areas. If you get caught up looking only for good staging spots, you may end up targeting areas that look really good, but just don’t have a lot of fish moving through them.

Start by identifying shallow, flat, protected areas of your body of water. Here’s a great example. 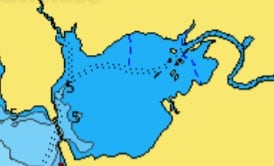 I’ve never been anywhere close to this lake but it’s a pretty good bet that bass spawn in that bay-like area. It’s protected from the wind and it’s shallow, making it conducive to bed-making, and it’s large, meaning large numbers of fish might migrate there. Now follow the map back out to the main lake and note any areas where bass could stage. These could be points, areas where a river channel swings, bridges, deep banks, or a number of other things.

Just like in the summertime, staging bass want to be close to shallow and deep water. They want to have access to the comfort deep water provides them right up until they make the push into the actual spawning grounds. This is why they prefer 45-degree or steeper banks in this part of the year.

Here are some potential staging areas (not every possible area is circled).

So knowing about where bass start, where they’ll end up, and having a list of places they could stage at, you can fish your way through the area and try to intercept the migration. Bass will move from the green circle to the orange circle, stopping at the red circles along the way. You can repeat this process at any lake and fish through the migration route you’ve identified until you run into bass.

Now, this is obviously oversimplified. Fish are not necessarily going to stop at the same places every year, they are not going to migrate the same exact way every year, and they won’t even spawn in the same places every year. Lakes change, and how quickly a bass moves is heavily dependent on the extremely inconsistent spring weather. On top of all that, great staging areas can sometimes be very subtle and not necessarily a super obvious point or channel bank. Prespawn is challenging and the only way to figure it out is to get out there and do it, but if you put in the map study and can identify places where large numbers of fish will end up, you can trim the available water quite a bit and simplify the search.

I personally like to start on the main lake and fish inward at the early parts of the prespawn and go in reverse as the bass get closer to full-blown spawn. Not all the fish will spawn at once and they’ll occupy many different stages, so you can find fish in different stages of the migration/spawn. Oftentimes you can target the stage of fish you’re most comfortable fishing for, but you won’t find large numbers of fish in all areas, so start at the end where you have the best chance to find the largest numbers and move on from there.

The early stages of the prespawn often coincide with some of the best crawfish activity of the year, meaning the crankbait bite can be absolutely fantastic. A subtle craw-pattern crankbait like a DT Series or Spro Little John can ignite some serious prespawn action. Swimbaits, like a Strike King Rage Swimmer, and Jerkbaits, like a Megabass Vision 110, can be great weapons in clear water lakes.

When spring cold fronts hit hard and bass lock down, switching to a slower presentation such as a shaky head or football jig can pay dividends. When the fish eventually reach the bank, a Senko, a soft jerkbait like a Super Fluke, and a flipping jig are staples.

Ultimately, you have to find what works for you and applies in your body of water. The prespawn period offers a lot of different opportunities to catch bass in different ways, but if you figure out the general migration route bass take where you fish, you can intercept it and catch a lot of fish as long as you’re willing to put in the time to find them.