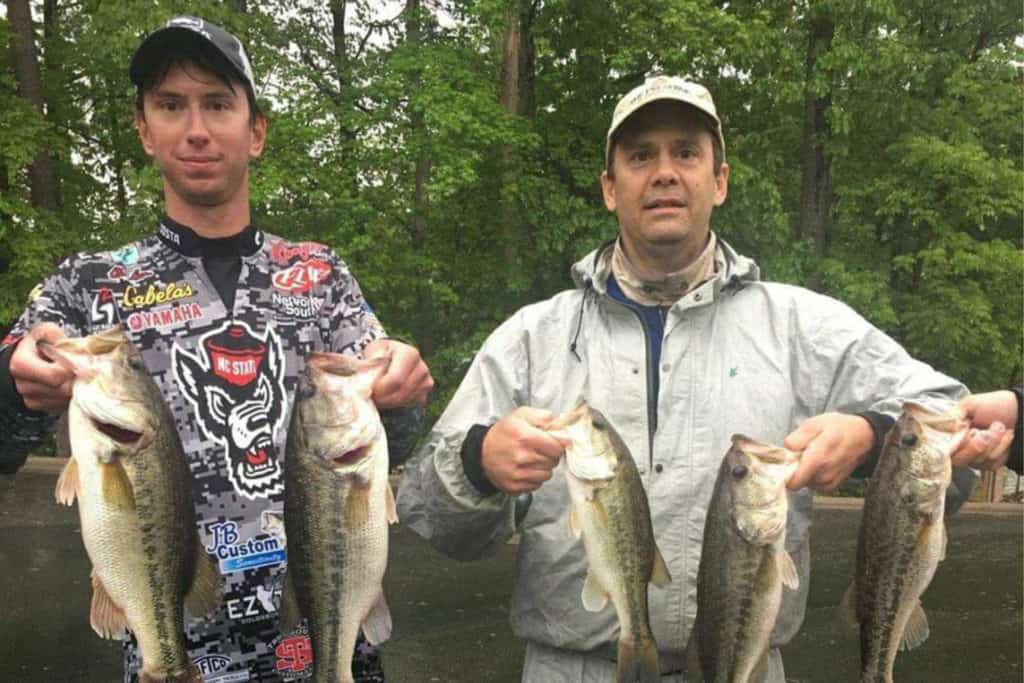 There’s a whole lot of content on the internet trying to teach people how to fish offshore. Most of it is not very good. Successfully approaching an offshore bite is challenging, and there is an attention to detail and a certain level of patience required that is often misunderstood. It’s something that requires a ton of repetition and hours on the water to master. I can’t change that, but if you’re someone that is still struggling to catch offshore bass, I’m hoping I can jumpstart that process.

I used to be embarrassingly terrible at fishing offshore. If you’re reading this and thinking “I’m not very good at this”, I promise you are better than I was. I used to get up at 4AM to catch the morning topwater bite in the summertime, because I simply could not catch fish any other way. But through nothing but hours and hours of trying, I became unhorrible at it, and then I became okay at it, and now I’d dare to even say I’m pretty decent at it. I never found many articles along the way that were helpful, though. If you are having a similar experience, I’m hopeful this is the one you are looking for. I’m hopeful how I learned can help you learn.

When you open a topo map to look for offshore spots, one of two things usually happen. You get sensory overload from all the lines everywhere and have no clue where to begin, or your eyes immediately go to the biggest juiciest looking point, hump, ledge, or collection of squiggly lines in the viewing pane. Both of these are bad, the former for obvious reasons, and the latter because 367 people have fished that awesome looking point just since Tuesday.

Instead of looking for individual pieces of structure that may hold fish, cut out 95% of the water immediately. Select one small area of the lake as your target zone. I usually opt for a medium to small creek arm that has some structure out in front if I can find it. It doesn’t matter too much though. This is about learning, so don’t put too much thought into whether or not it looks good. Select an area that you can scan in no more than three hours and consider that your target zone for the day.

I usually opt for a medium to small creek arm that has some structure out in front if I can find it.

Below are a couple examples of areas you should start in. I like these areas because they have significant structure on the main lake and heading into the creek. All of those places are areas where schools could form early in the summer when the fish first migrate out of the spawning creeks. 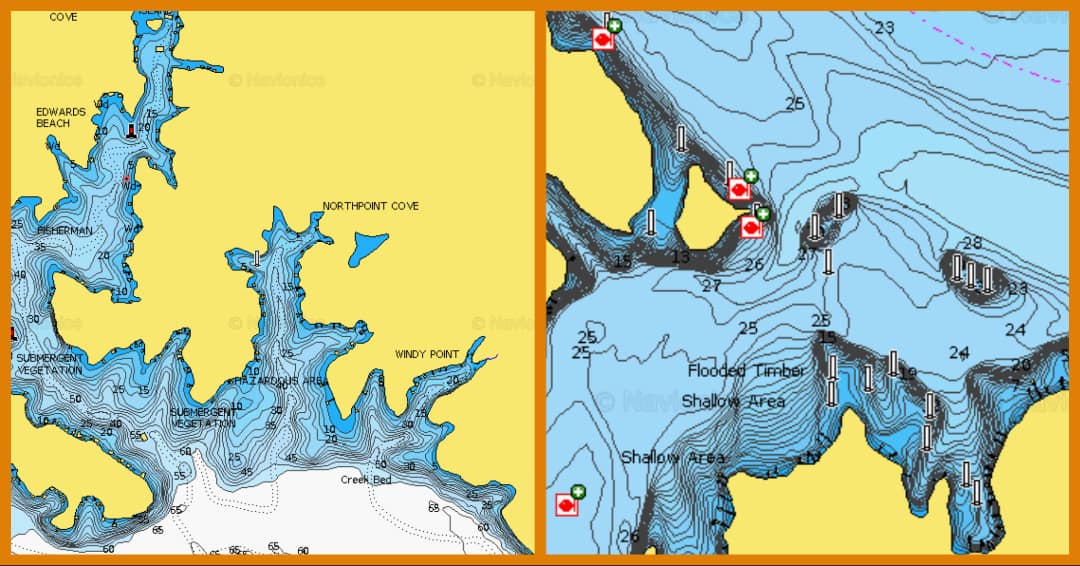 As much as it sucks that $1000 electronics play a significant role in this, they do. If you don’t have quality electronics in your boat, you’re at a disadvantage. Don’t stop reading though. I learned how to fish offshore with subpar electronics. You can too.

Start at one end of your target zone and scan everything all the way to the other end. If there is a point, scan the entirety of it. If there is an area with a slow sloping bank that looks like the lamest spot ever, scan the whole thing. Scan everything. You’ll be surprised at how much stuff you find.

If this is the part where you usually say “I can never tell what’s fish and what isn’t”, fret not. You’re not looking for fish. Forget about the fish. I genuinely believe one of the things people struggle with the most when it comes to learning offshore fishing is identifying actual bass on the graph. You'll eventually get to a point where that is second nature, but if you're still in the learning phase, change up your approach to something easier.

You’re looking for pieces of cover, areas of hard bottom, or any structure that does not match with the topo map. Anything you find that isn’t flat boring silt bottom, drop a waypoint on it. Like I said, you’ll be surprised how easy it is to find stuff. Note any instances of rock or hard bottom along with any instances of cover. Mark it all. Not only will you identify areas that will hold fish, but you'll gain valuable hours with your units learning how to actually effectively scan.

I’ll note one thing here. While you’re not actively looking for bass while you’re scanning, be aware of bait balls if you do see them. Bait is very easy to identify, and those places are obviously more likely to hold fish, so don't totally ignore signs like that just because you're primarily focused on structure and cover.

The best offshore fishermen in the world would likely scoff at the idea of not looking for bass while scanning. In a tournament scenario, they'd be right, but If you’re just trying to learn how to fish offshore, I recommend doing what I did; just look for structure itself. It simplifies things and you can still get into some fish.

The easiest type of stricture to fish is something that is long and skinny. Ledges, channels, rock veins, roadbeds, and grass lines are good examples. These are the easiest types of structure to fish because you can simply line up next to them and work your way down them. They’re not expansive and overwhelming like a big point or hump can be. You’ll never lack confidence that you’re making the right cast, because you can throw all the way across it and cover the whole thing. 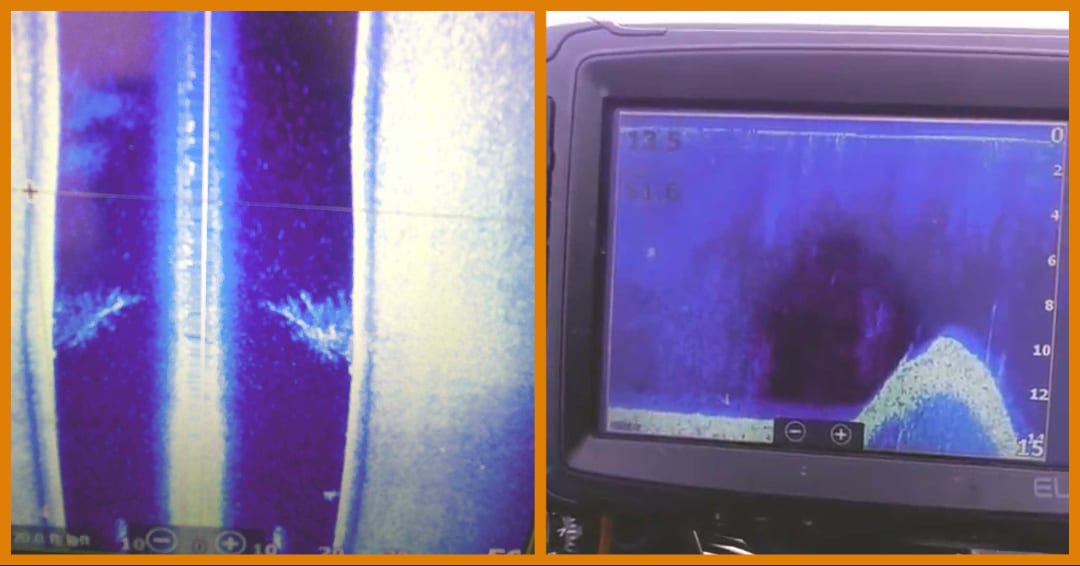 Left: Brushpile on the sidescan Right: Roadbed on the downscan

Now it’s time to start going through the things that you marked. This is where I made a critical mistake countless times. Put your freakin crankbait away. That deep cranking rod you brought because you have to have one to fish offshore? Stuff it back in the rod locker. Crankbaits are awesome offshore tools that can catch a ton of fish in a hurry, but they’re also the most likely to not get bit at all. We’re practicing here. This is about getting bites and being able to feel the bottom.

Instead, opt for something you can drag. Carolina rigs, shaky heads, and football jigs are all applicable options. You want something you can drag very slowly, though, for a handful of reasons, the first being you can catch fish from a wider array of moods with a slow bait. You might not catch 20 in 20 casts, but you’re far less likely to blank on an area that you know holds fish, especially if you’re fishing a pressured lake. You’re trying to minimize the variables here, so pick something you know can get bites.

Secondarily, it’s important to feel the bottom. If you’re fishing rock on a point, you have to know where your bait is in relation to the structure. Making accurate casts to targets you cannot see is challenging. Being able to feel the rock on a point will let you know your bait is in the right place. Then you’ll be able to build some confidence with your casting and boat positioning.

Take your bait and drag it as slow as you possibly can over whatever you’re fishing. If you’re hitting rock, you want to be able to count the rocks you’re hitting. Move it that slow. Really soak that bait. This is a good time to employ the “slow but fast” strategy. Keep your retrieve slow, but don’t make too many repeated casts. Be sure to continue covering water.

Even if you're not catching a ton of fish right away, this process will still help you develop a better understanding of boat positioning, accurately targeting cover and structure that you can't see, and understanding where your bait is in relation to it, all of which will help you get to that point where you are catching more bass.

And that’s the process. Slow down, make your way through your target zone, and then duplicate the process at other places on the lake. You might get lucky and catch fish immediately. It might take a while. But you eventually will find fish, and then you can start identifying more specific variables like depth and type of structure and really narrow your search.

Questions you may have had from that

What kind of electronics do I need?

You don’t need a 20-inch flatscreen TV to be effective at scanning. I learned how to do this with a Elite-7ti from Lowrance and a hook-7 that weren’t even networked together. Now that’s kind of the bare minimum that you can have, but you don’t need the best stuff to be successful. You do need a unit with StructureScan or a competitor’s equivalent. You need to be able to see down and to the sides to really be effective at identifying things like rock and timber. Connecting your units via an NMEA network and adding a heading compass, such as a Lowrance Point-1, to that network will be a worthwhile investment. For anyone who may not know, this little tool allows the arrow that represents your boat on your unit to reflect the actual heading of your boat, even if you aren't moving. Without it, the arrow just kind of does whatever it wants unless your boat is in motion. Knowing which way your boat is pointing when it isn’t moving will help with casting accuracy and the ability to hit smaller targets like brush piles.

Will this work on every lake?

Not exactly. This is bass fishing. Other than a massive cold front the night before a spring tournament, there is really nothing you can count on 100% in this sport. It's a good way to jumpstart your learning process though, and you can make small tweaks to it depending on how your lake sets up. For example, some lakes won't have much structure to work with beyond stale looking points. On those lakes, you'll have no choice but to look for fish. Some lakes will have grass beds on the bottom, which require a different approach. You can always do step one and two, though. Then you're free to tinker with step three based on what is in front of you.

Five Places to Find Bass in the Prespawn

The Key to Catching Fall Bass is Keeping An Open Mind

What is a thermocline, and how does it affect bass?